The Making of "The Oriental Theater, Denver" 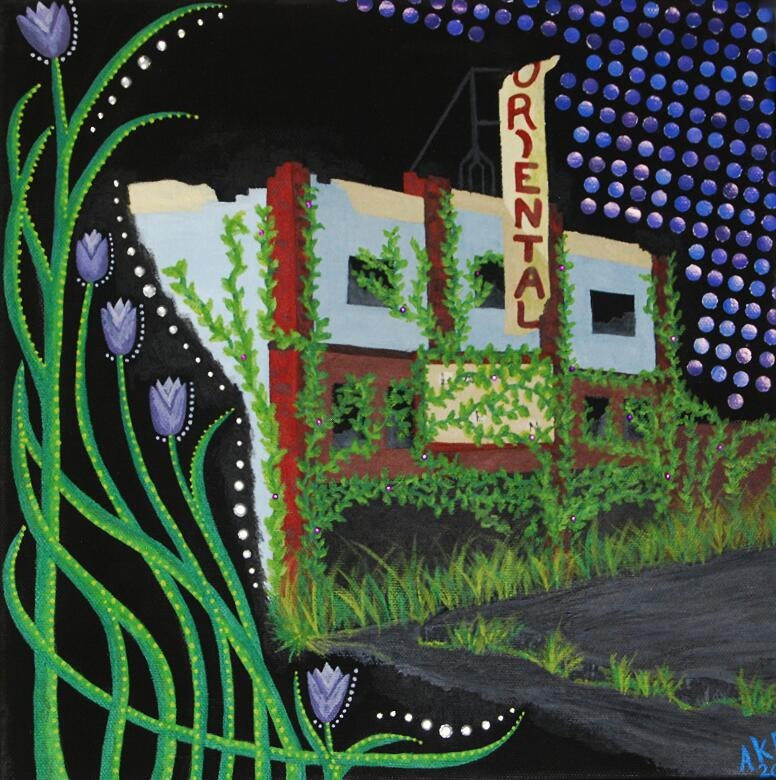 A blank canvas can be so stressful at first - it contains all the potential in the world, but only one paiting can be done at a time!  How do I choose just one???

When I first picked up that blank black canvas I had a plethora of ideas running around in my head, but once I got the idea for that trippy flower border it just stuck. I started sketching without a concrete idea for the main subject of the painting, but quickly settled on the iconic Oriental Teatre after a passing suggestion from a friend.  The building in questions is already 100 years old, so making it look even older seemed completely feasible! 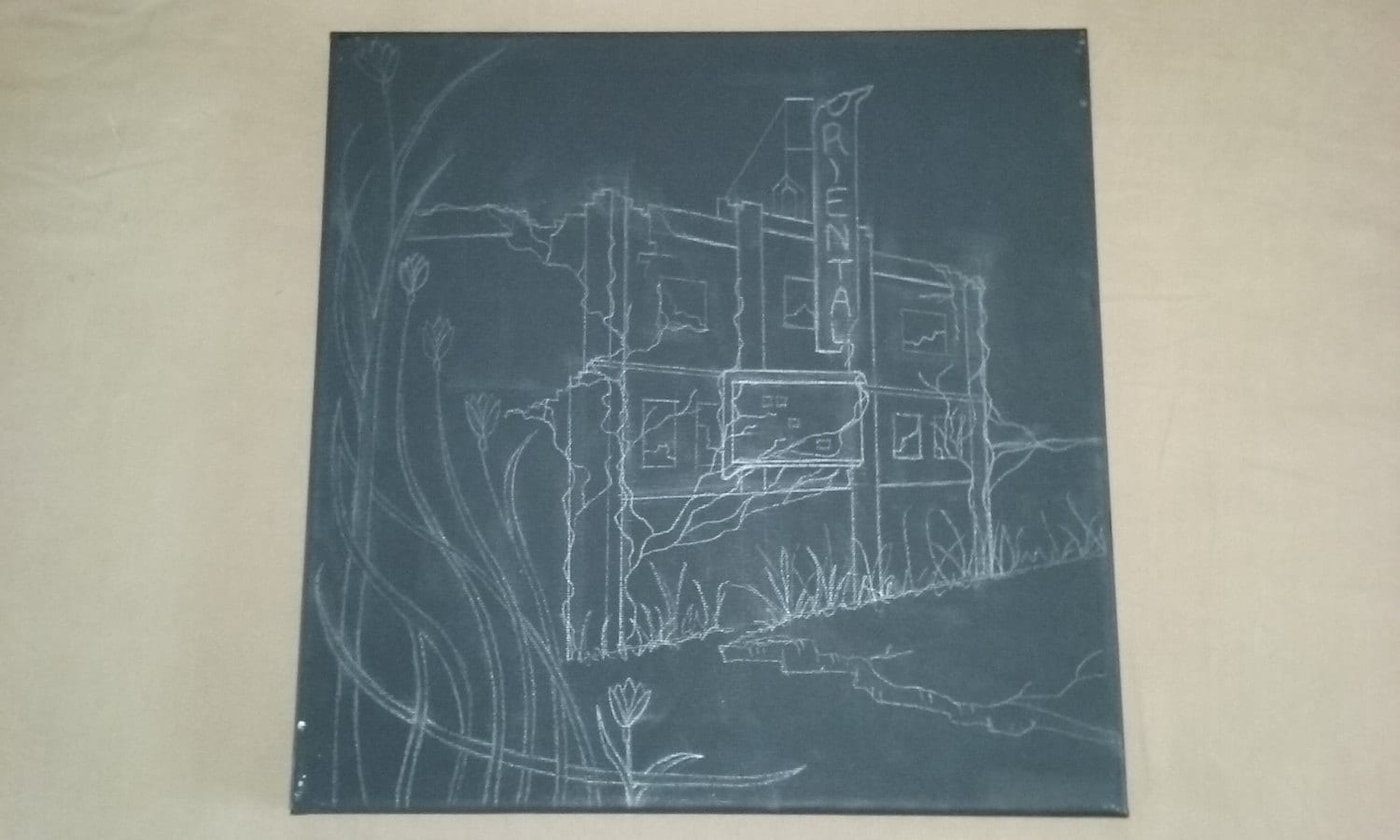 Sketching on canvas is very different from sketching on paper.  The canvas is much more textured, so the level of detail that I can draw on paper is just not possible on this medium.  I was more concerned with catching the movement of the border, and getting the angles of the building just right.  The rest of the details would just have to wait until they could be painted! 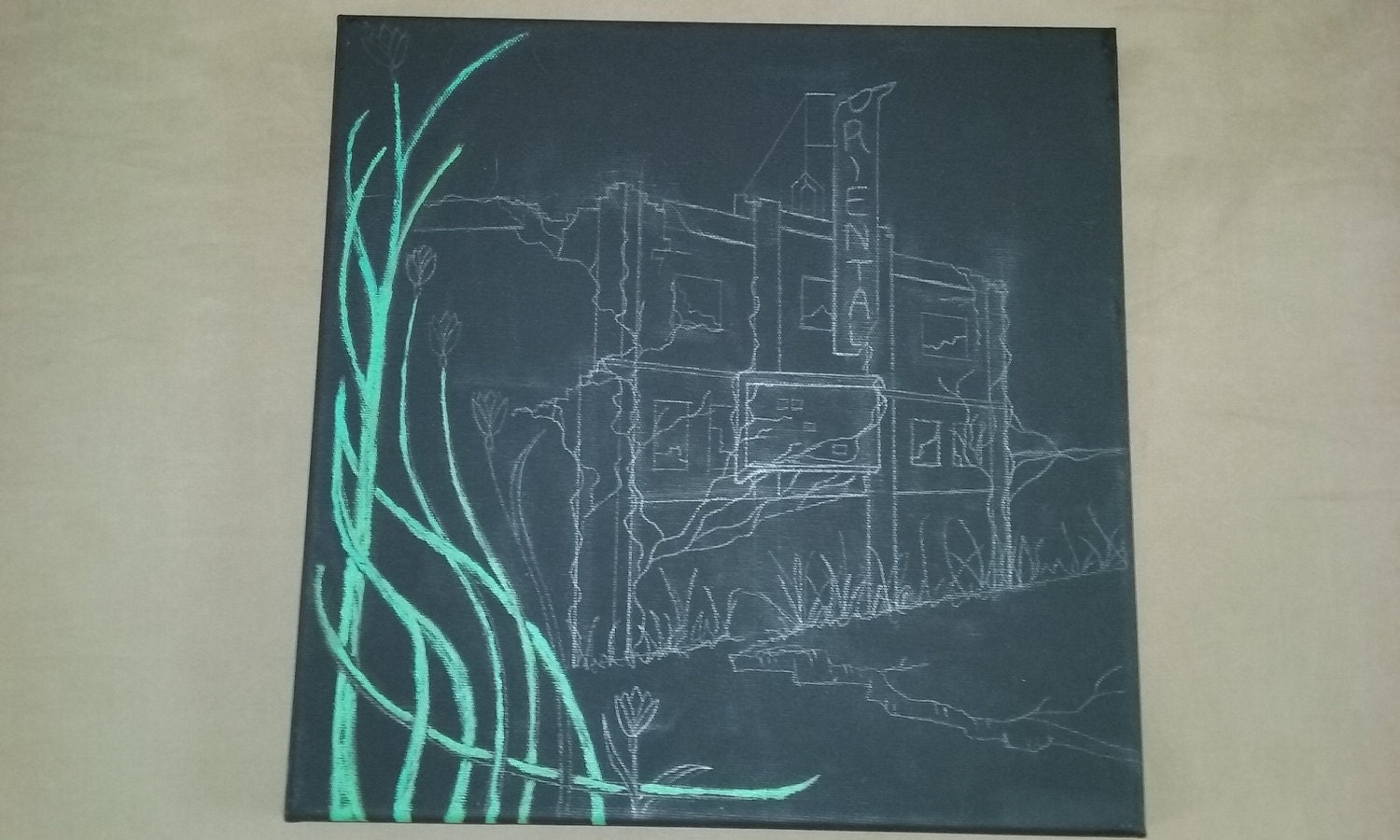 Step 2: Base paint layer for the border

I really wated this border to pop, so I made sure to lay down a nice bright layer of paint to start this very improtant feature of the work.  This way, even when I add some darker shading elements, the bright layer underneath will prevent anything from fading into the dark background.  I knew that I would be leaving a fair about of negative space in the finished piece, so this was an extra importat element to the painting. 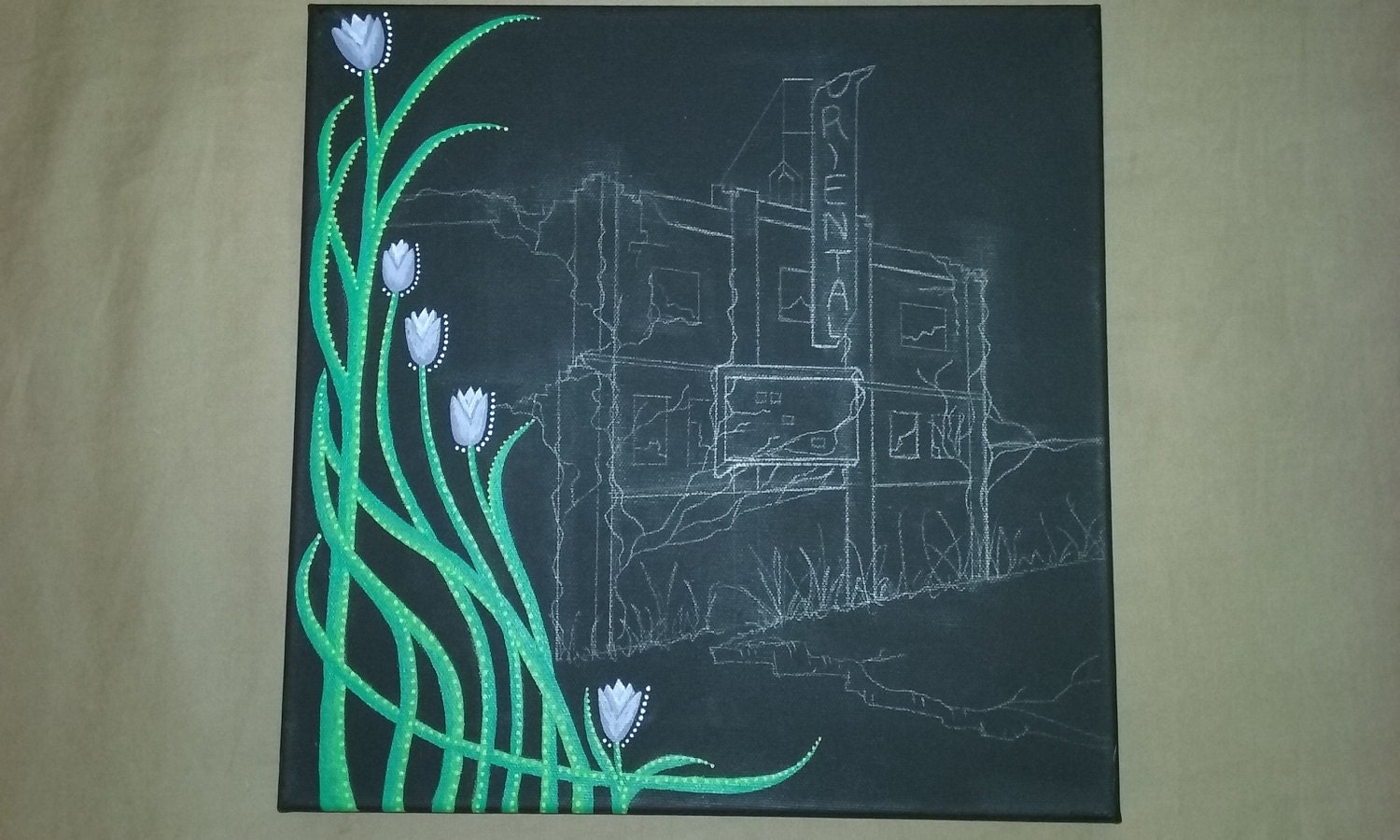 I decided to go with some crisp violet colored flowers to make sure they would really stand out, and because the green/purple color combination really sets my soul on fire!  I added some varriation in tone to the green areas, then decided to add texture with some simple dots in even brighter pop-y colors. 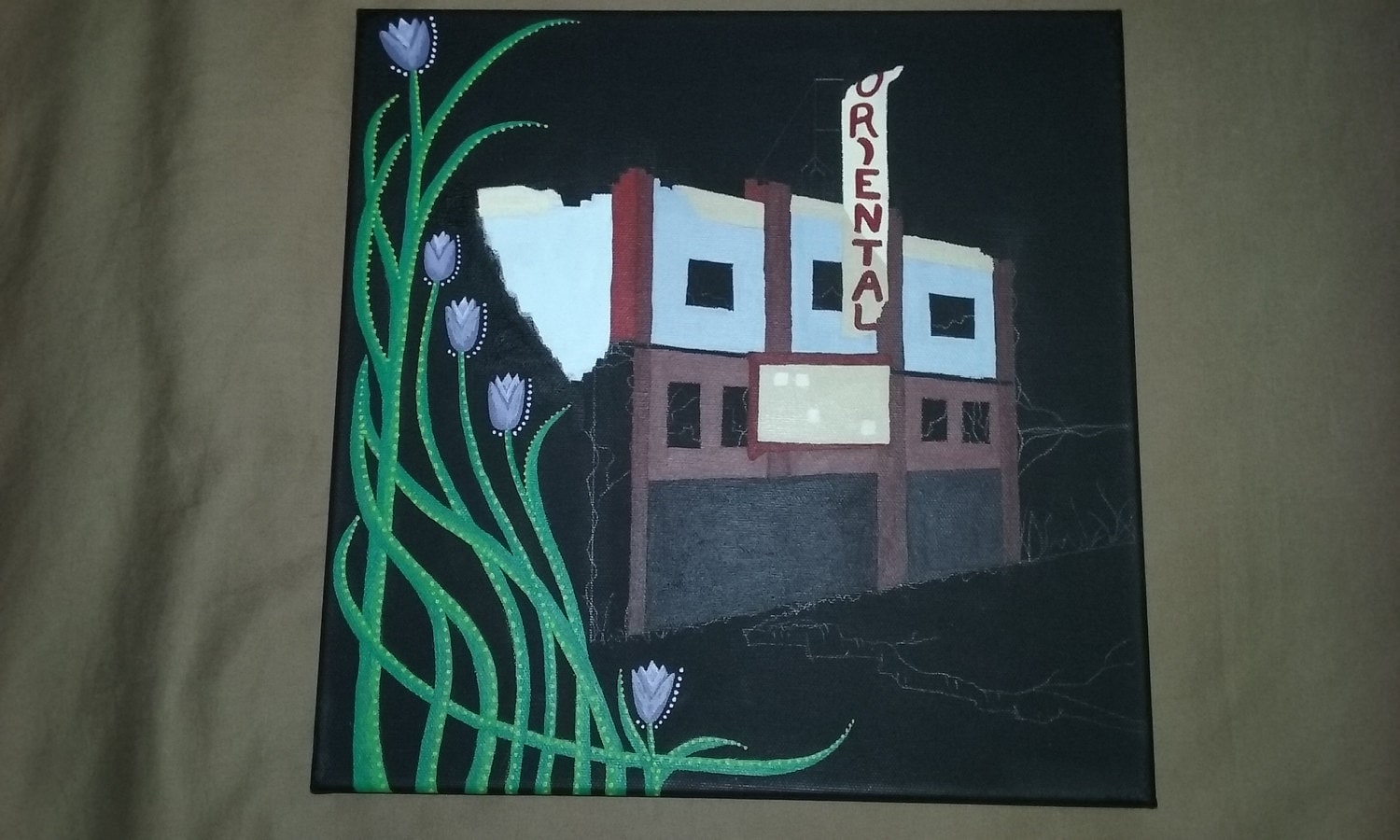 Step 4: Base paint layer for the theatre

Before making the theatre look overgrown in plant life I made sure the building was painted exactly how I wanted it!  Shading was especially important here, because I wanted to make sure the striking agle of the building is highlighted in both line and color. 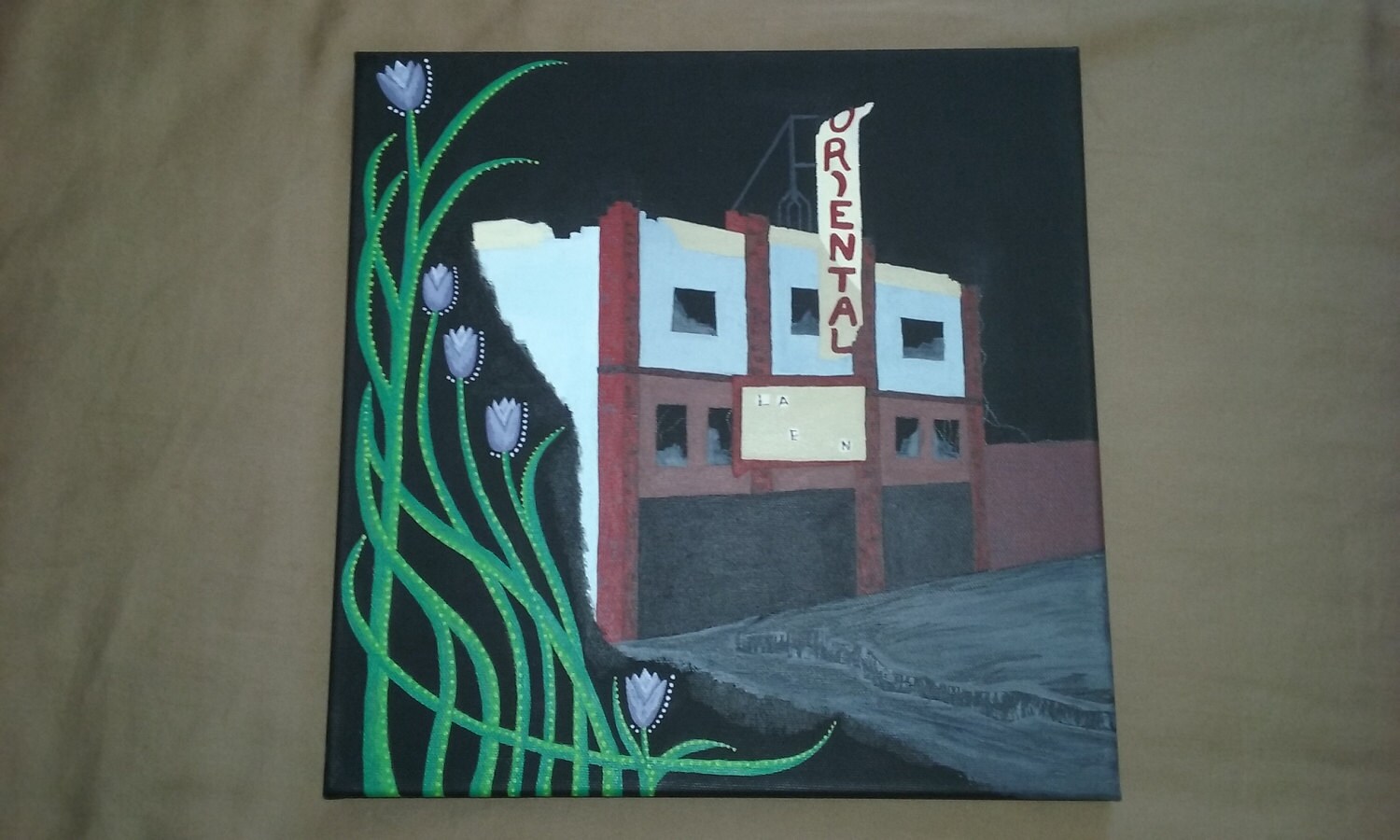 Step 5: Painting a black road on a black canvas

Here was a bit of a challenge- I wanted to make sure the road looked like blacktop that had been cracked and eroded with time, but seeing as how the canvas was already black I needed to use shades of grey to create an illusion of blacktop. I'm starting to feel the aged-ness of the subject already, with the missing bricks of the building, cracked road and broken windows. 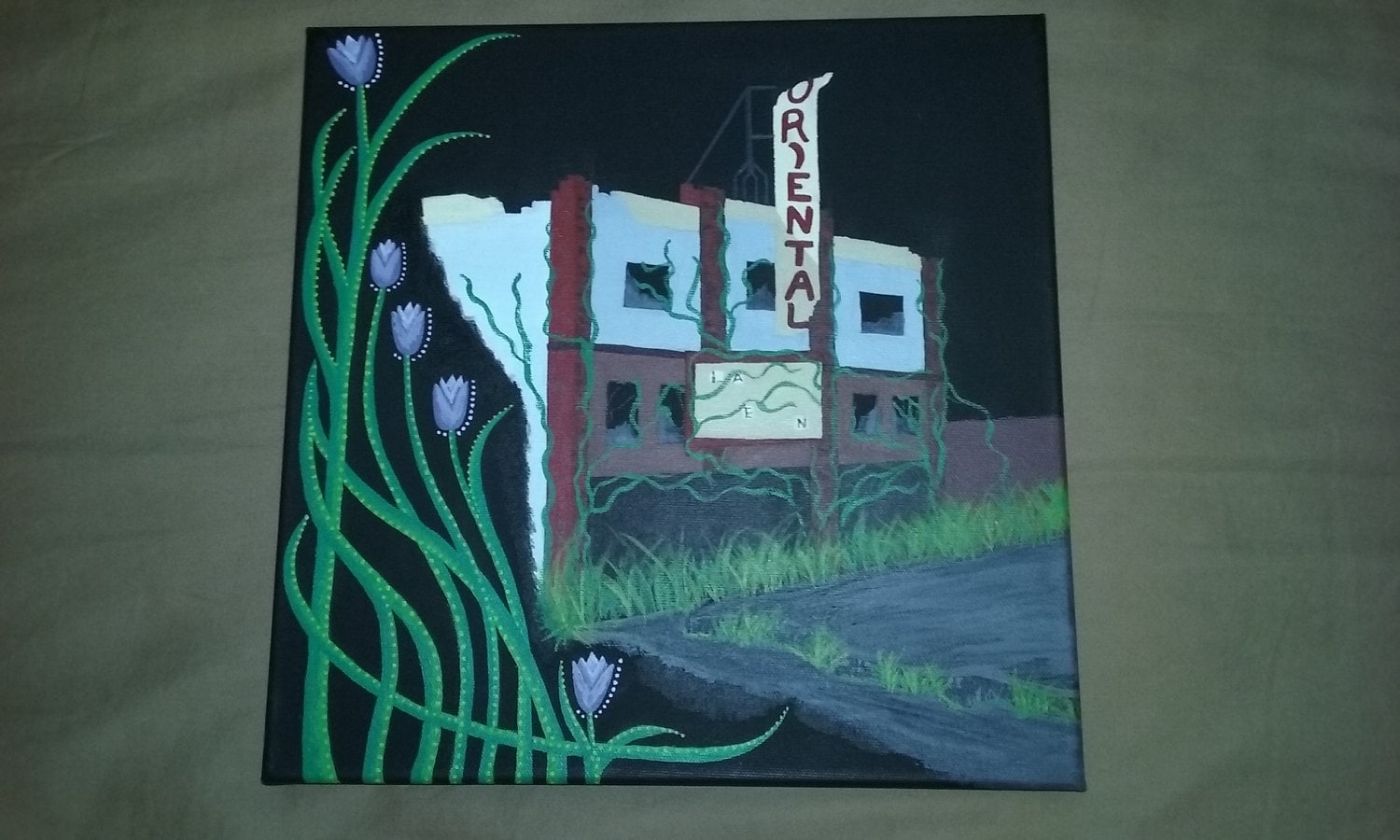 For this step I tried to think about how plant life fills in on abandoned lots around the city.  I knew grass would grow up through the cracks in pavement and concrete, and I wanted vines to be growing up over the building. 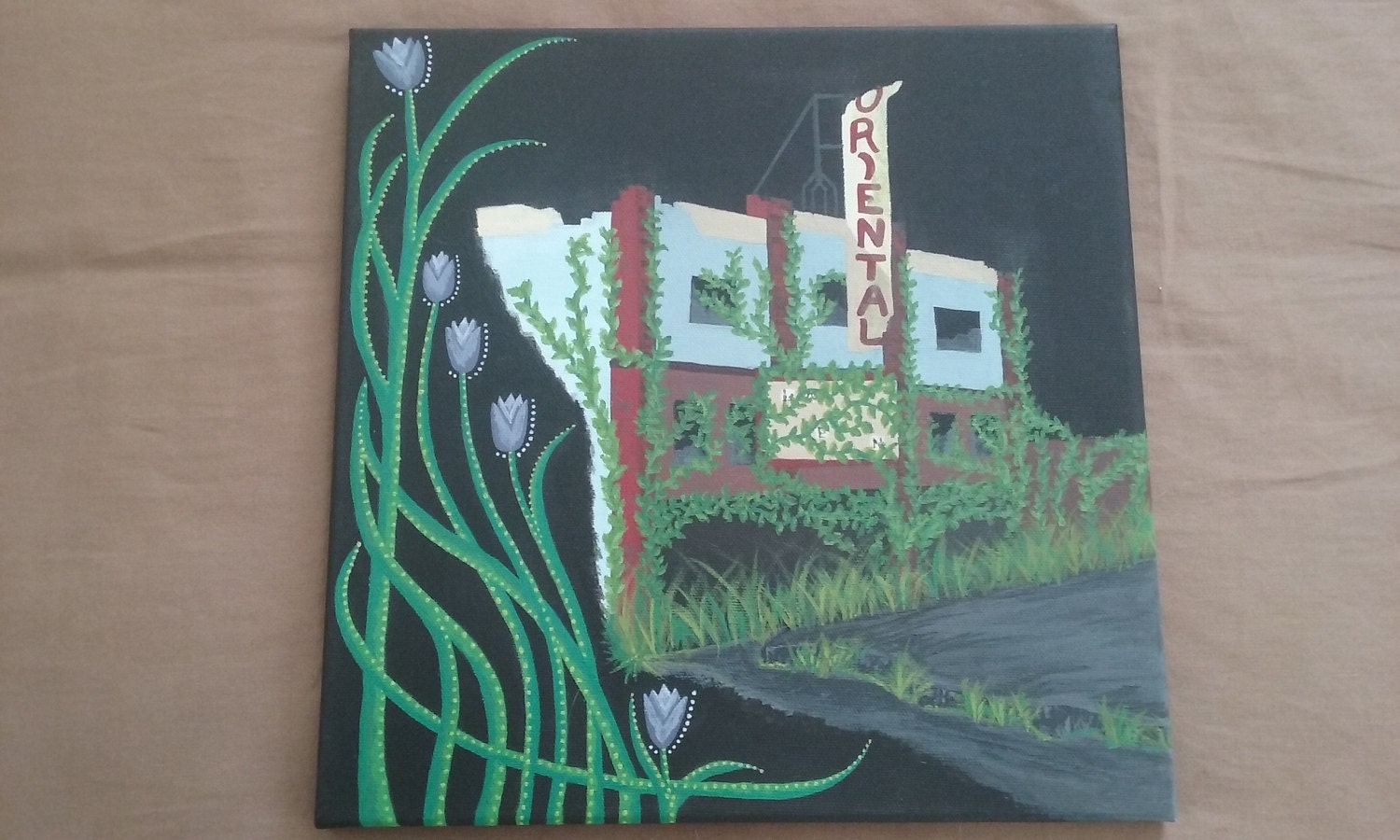 There was no way around this step - to get the effect I wanted I would have to paint and highlight each and every leaf by hand.  The work paid off, my finished vines are everything that I hoped they would be! 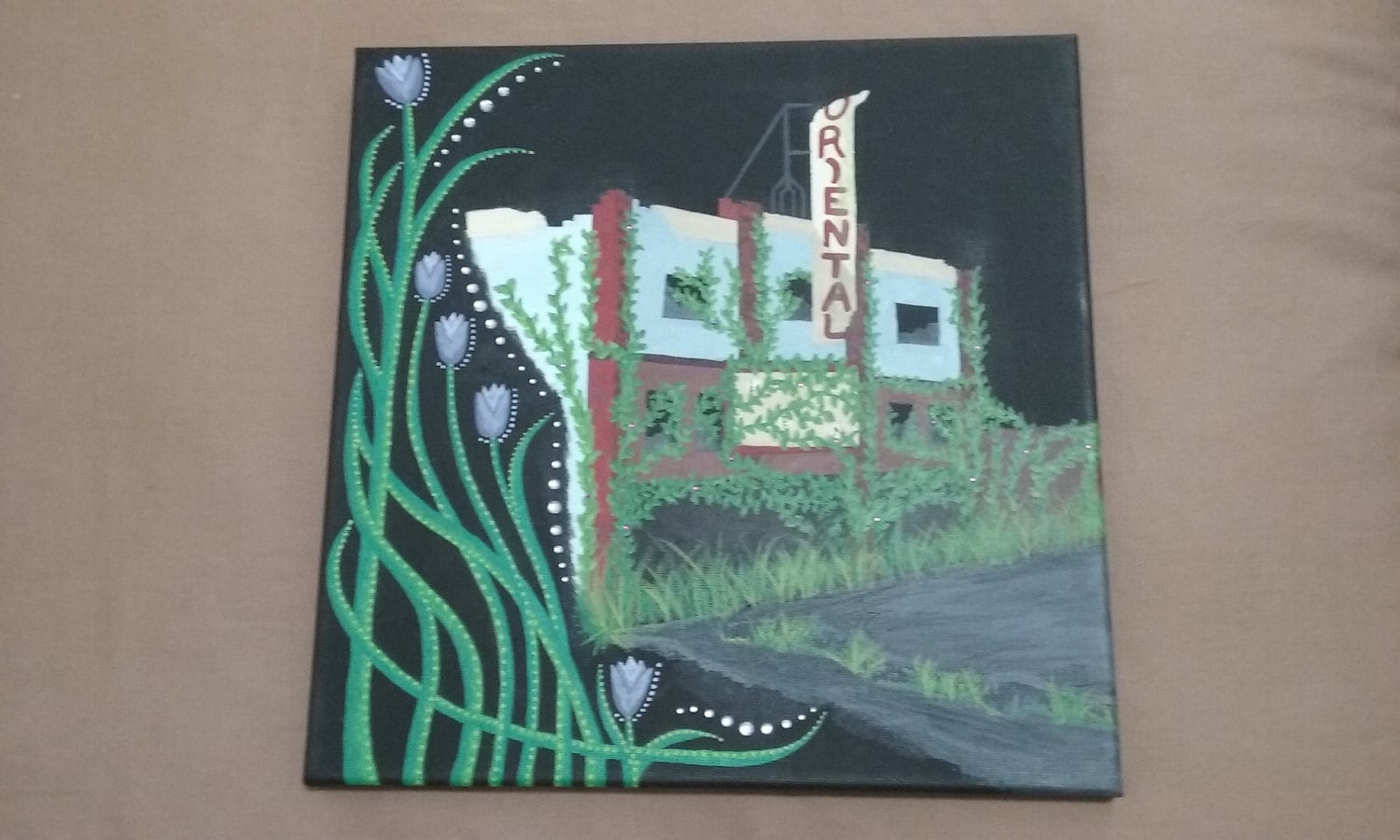 I felt that the piece needed some sort of transition between border and subject, as well as a novel and unexpected material.  I managed to meet both these criteria with arrangements of multi-sized glue on crystals.  Once they were all adhered I was very excited to see how the crystals caught the light as you move around the piece!  I was so happy with the result that I decided to add some tiny purple crystals among the vines to represent flowers, and reflect even more light! 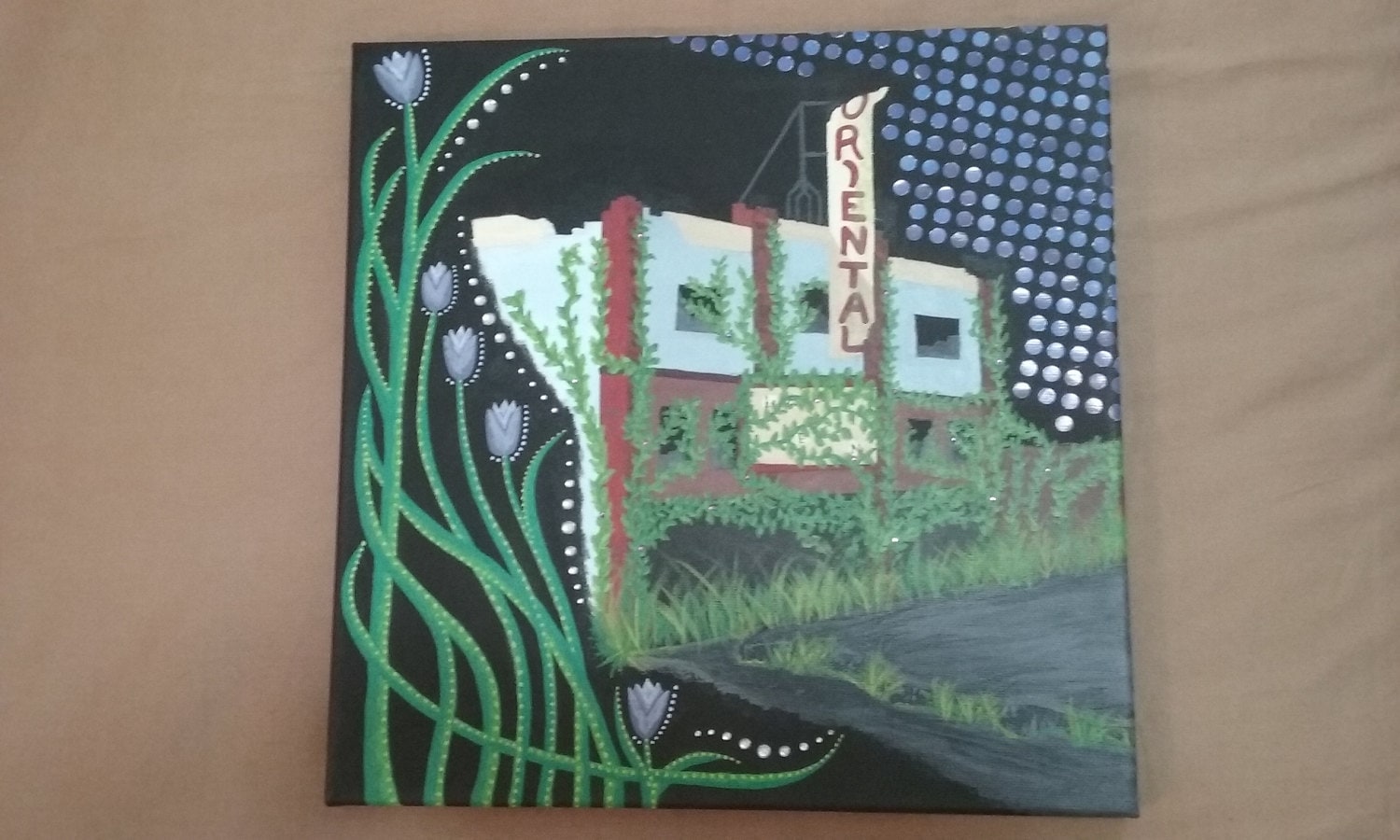 I wanted to create an impression of the famous Colorado bluebird sky, while also bringing in some new texture to the piece.  I knew I definately didn't want to simply paint a field of blue, this was a chance to play with some new materials and bring in new light to the piece.  I settled on some pixilated collage, using high gloss paper and a hole punch to make my materials.   I like that the sky reflects a shiny texture, while the crystals add a more sparkling light. It makes the piece much more interactive to the viewer. 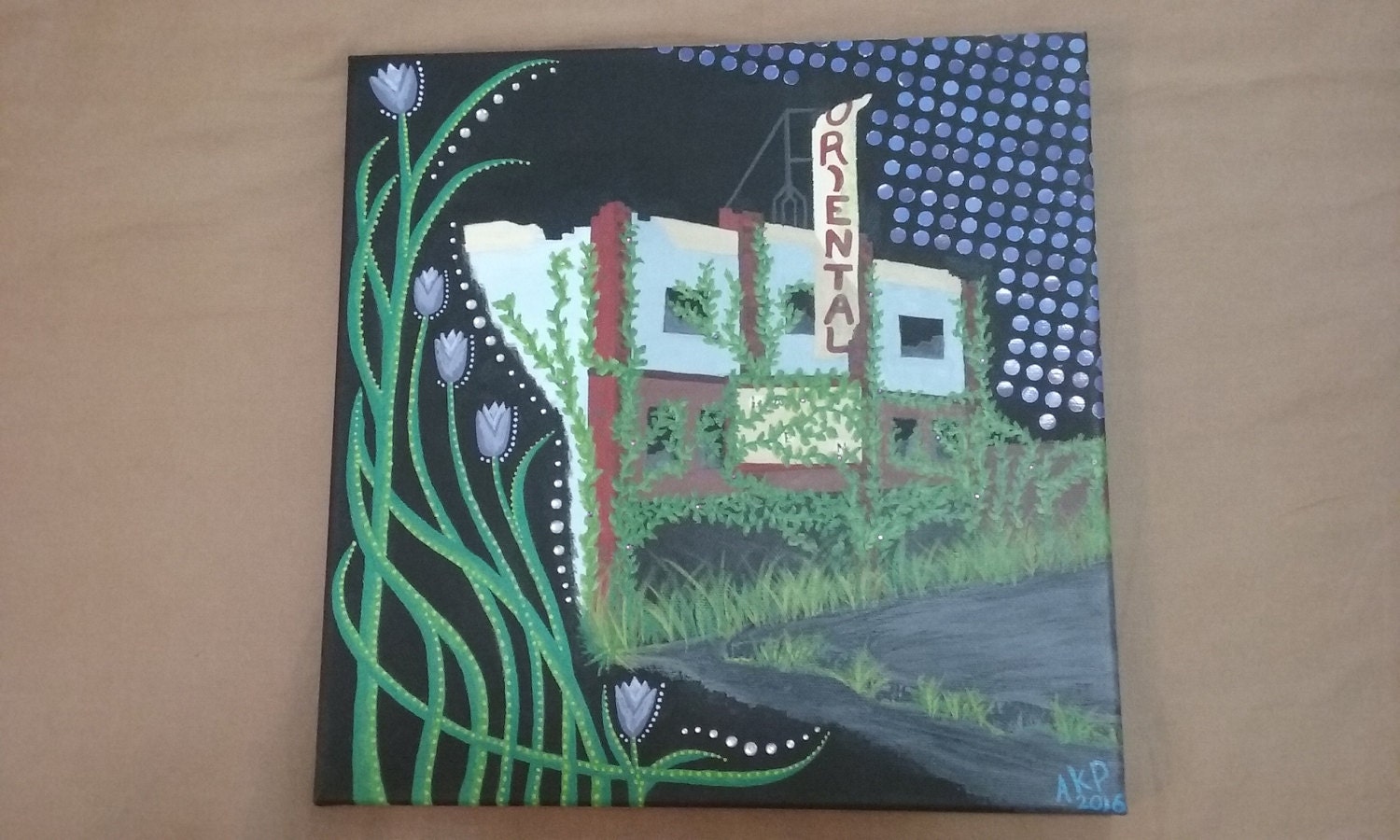 Some bright blue initials in the bottome corner, and this canvas is finished!  Now all I need is an idea for the other blank black canvas I have...