The Making of "Postcards from the Future: Chicago" 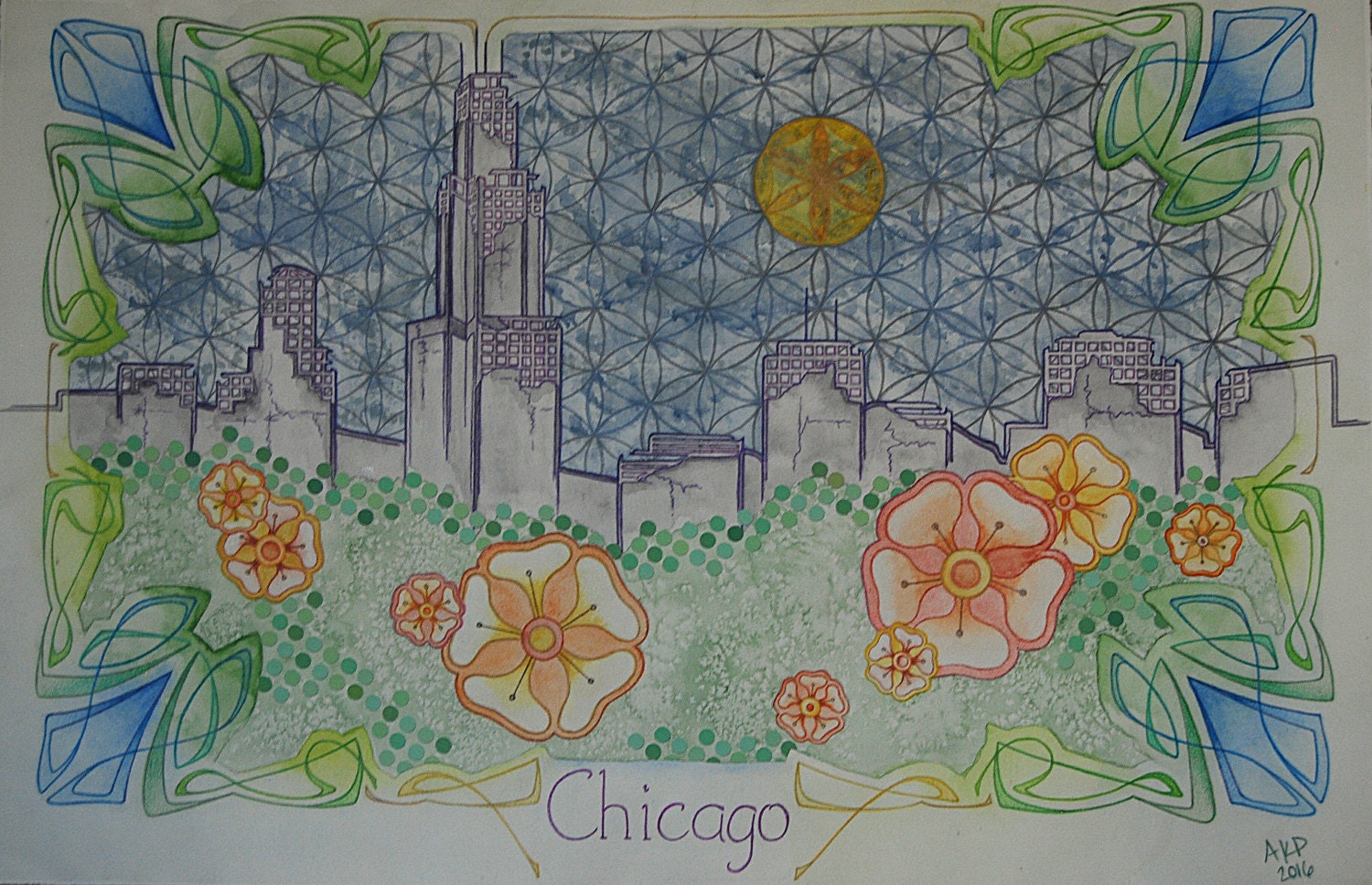 Greetings from the Future!

...or at least my interpretation of a possible future.  I started this series from a deep fascination with post-apocalyptic stories, abandoned structures and art deco style design.  Throw all those ingredients together and you get "Postcards from the Future"!

This work came together piece by piece, layer by layer, each ingerdient demanding complete attention until finally receeding into the final design.  The whole time I was working on this piece it felt like I was slowly pulling it out of the dream world and ever so slowly laying it down here in the physical realm.  The piece felt as if it existed in it's entirety all along, I was merely the conduit for making it visible to others 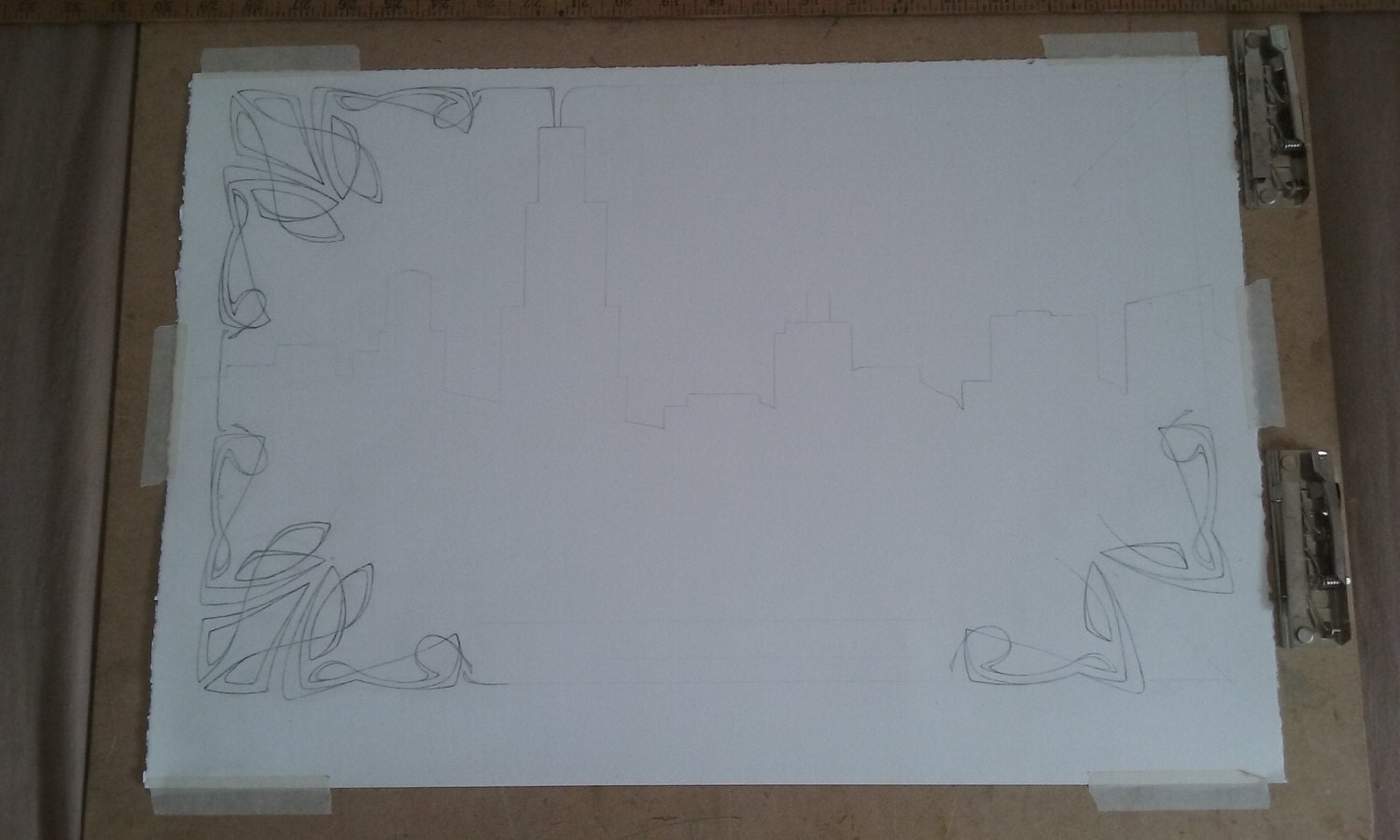 Step 1:  I started by sketching out the basic skyline and working in the art deco inspired border.  Setting up the feeling of a traditional art deco poster was the first driving force that pushed my creative motivation on. 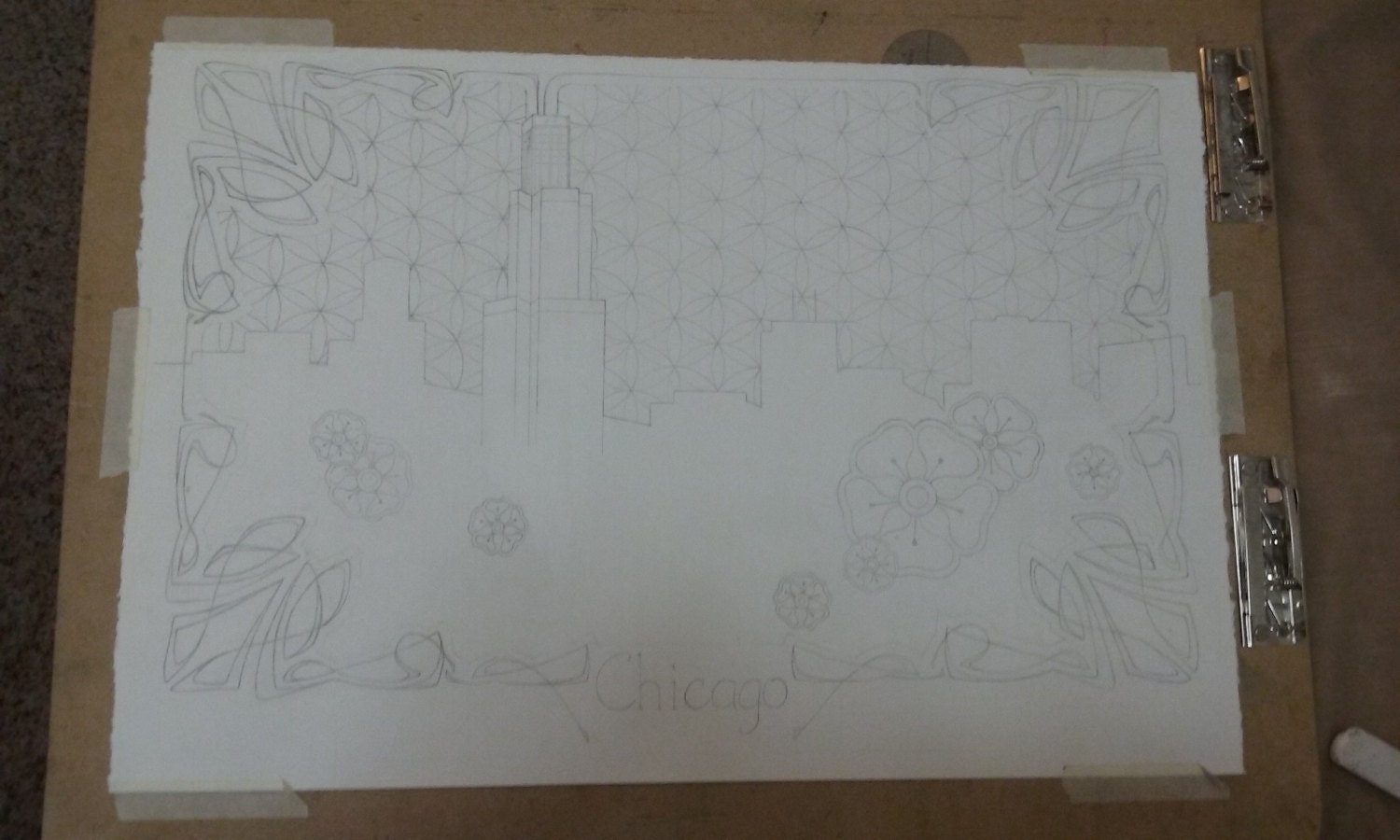 Step 2: Adding some art deco inspired flowers to the foreground and the flower of life repeating motif to the background finished out the layout of the piece.  I felt it was balanced enough to move on from here... 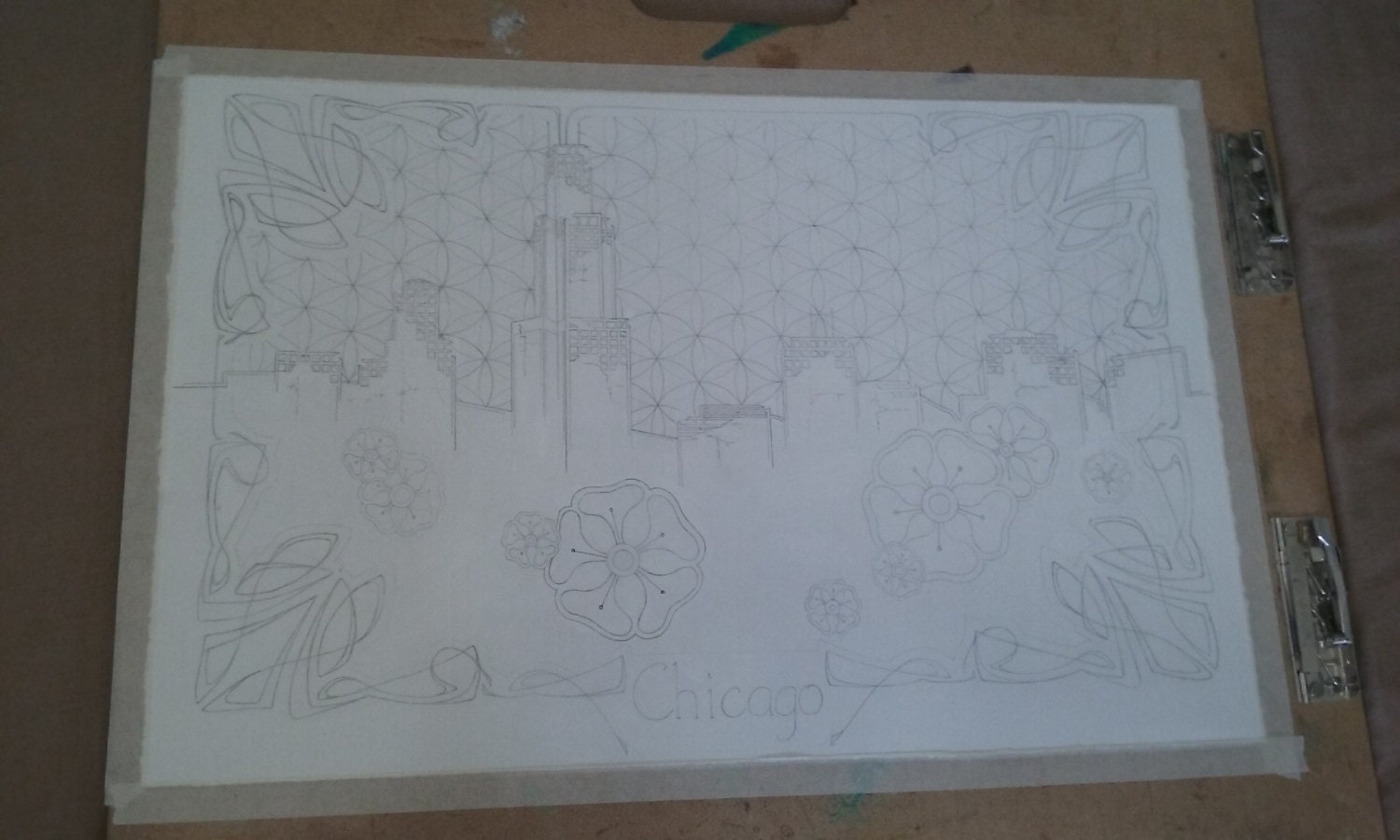 Step 3: Details added to the skyline sketch to show the degredation of time 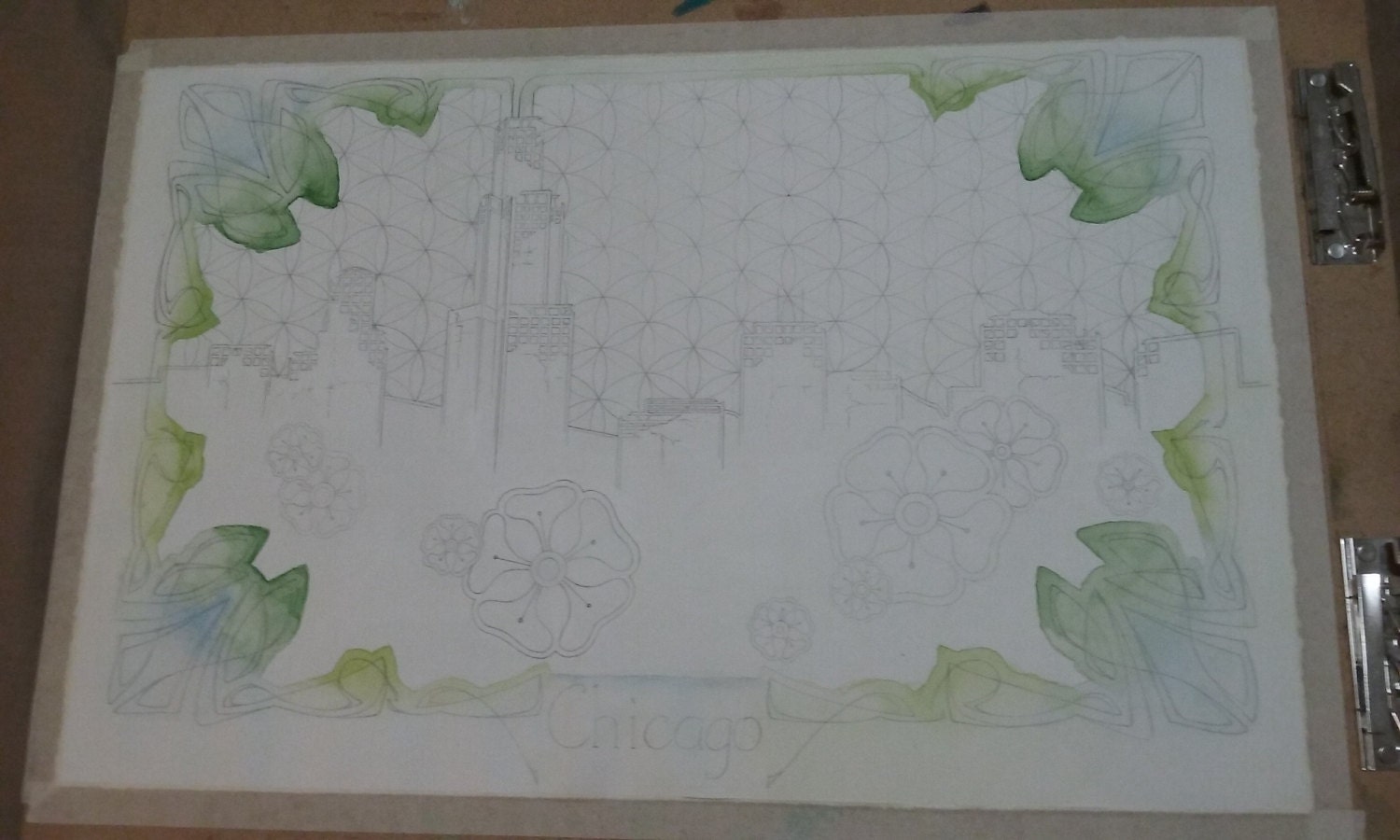 Step 4: First layer of color, blue green and yellow watercolors for the border. 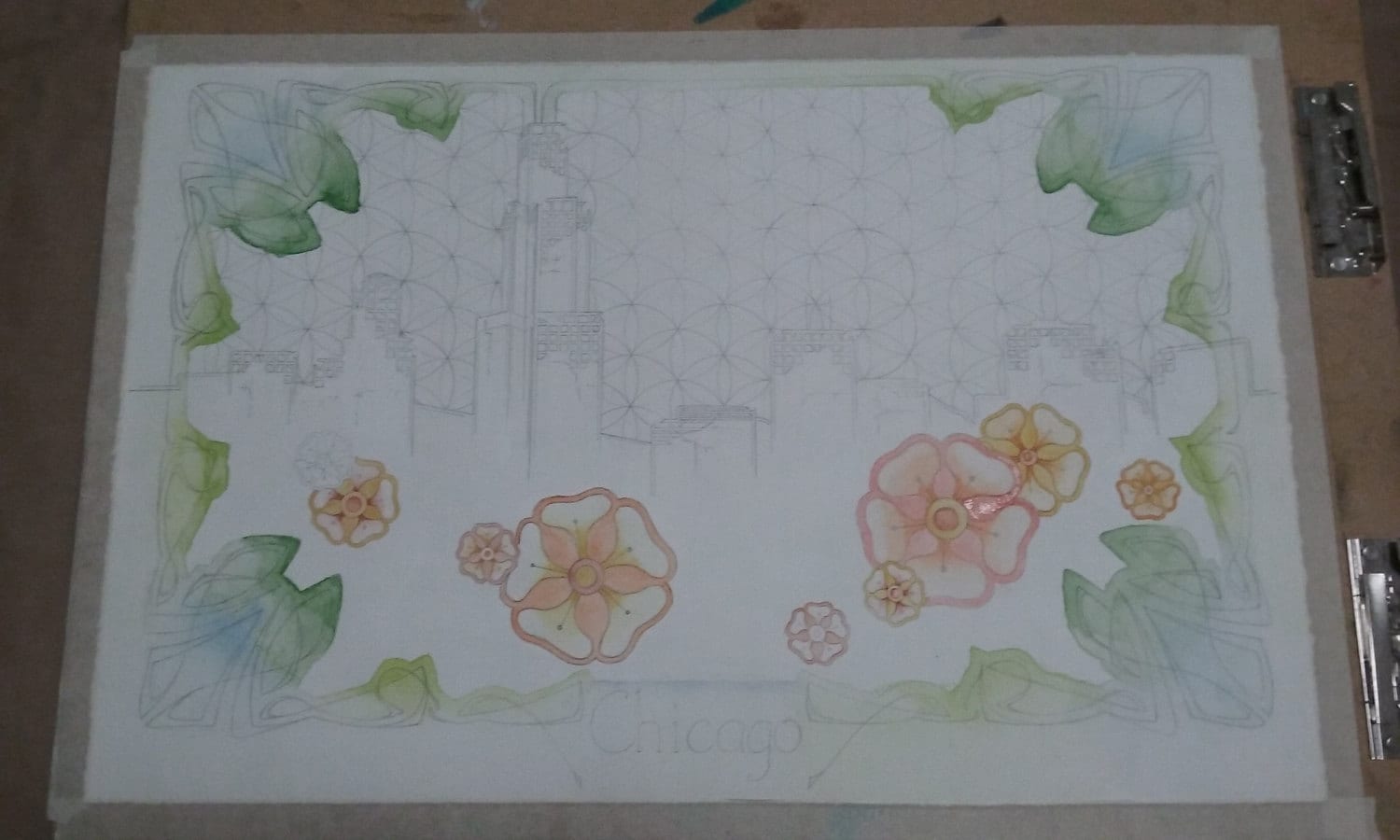 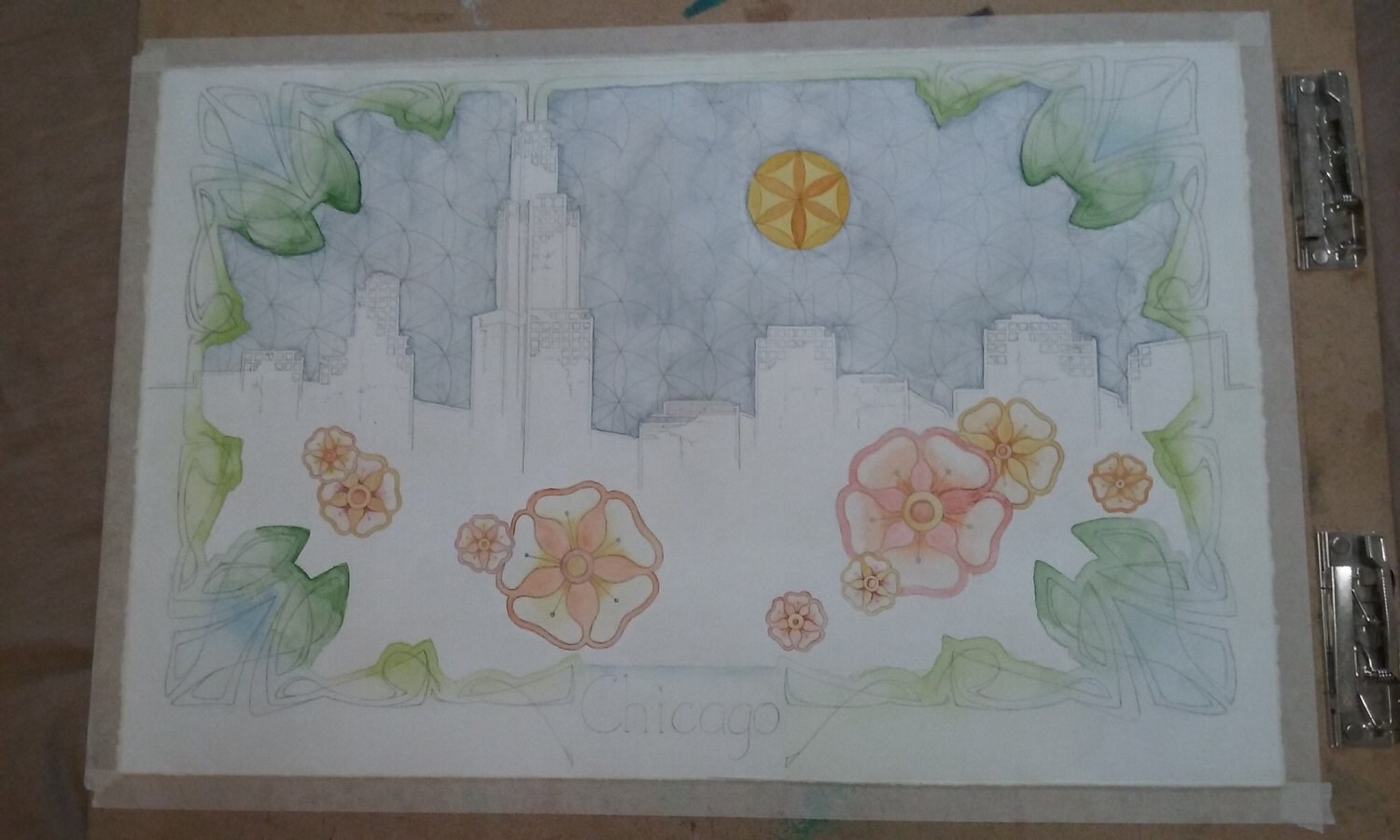 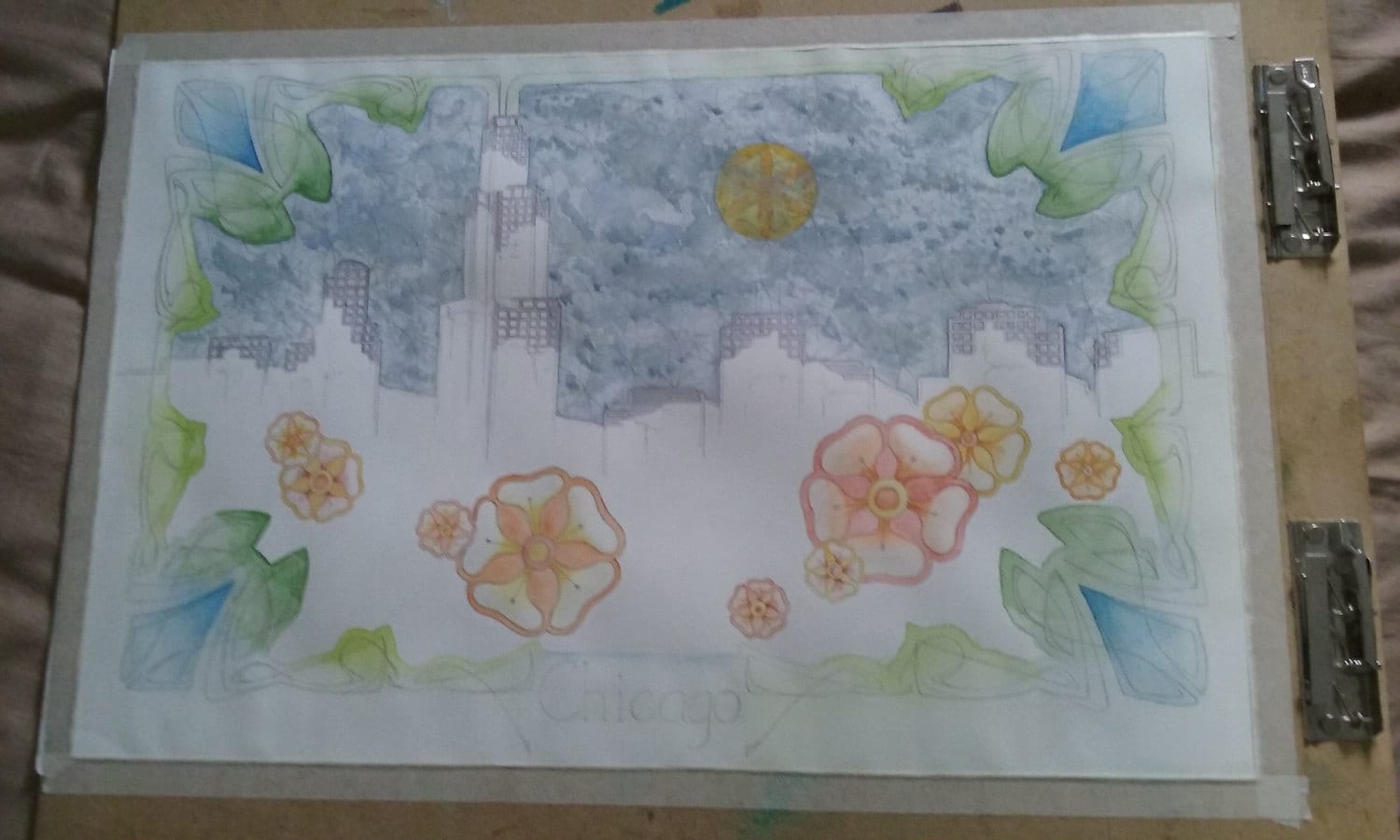 Step 7: Second layer of watercolors to add depth to the stormy sky and mellow out the sun. And here I started with the lightest portion of the skyline in a light purple mauve.

Step 8:  Filling in the rest of the skyline with varying shades of purple mauve, using the darkest shade as a stylized outline. 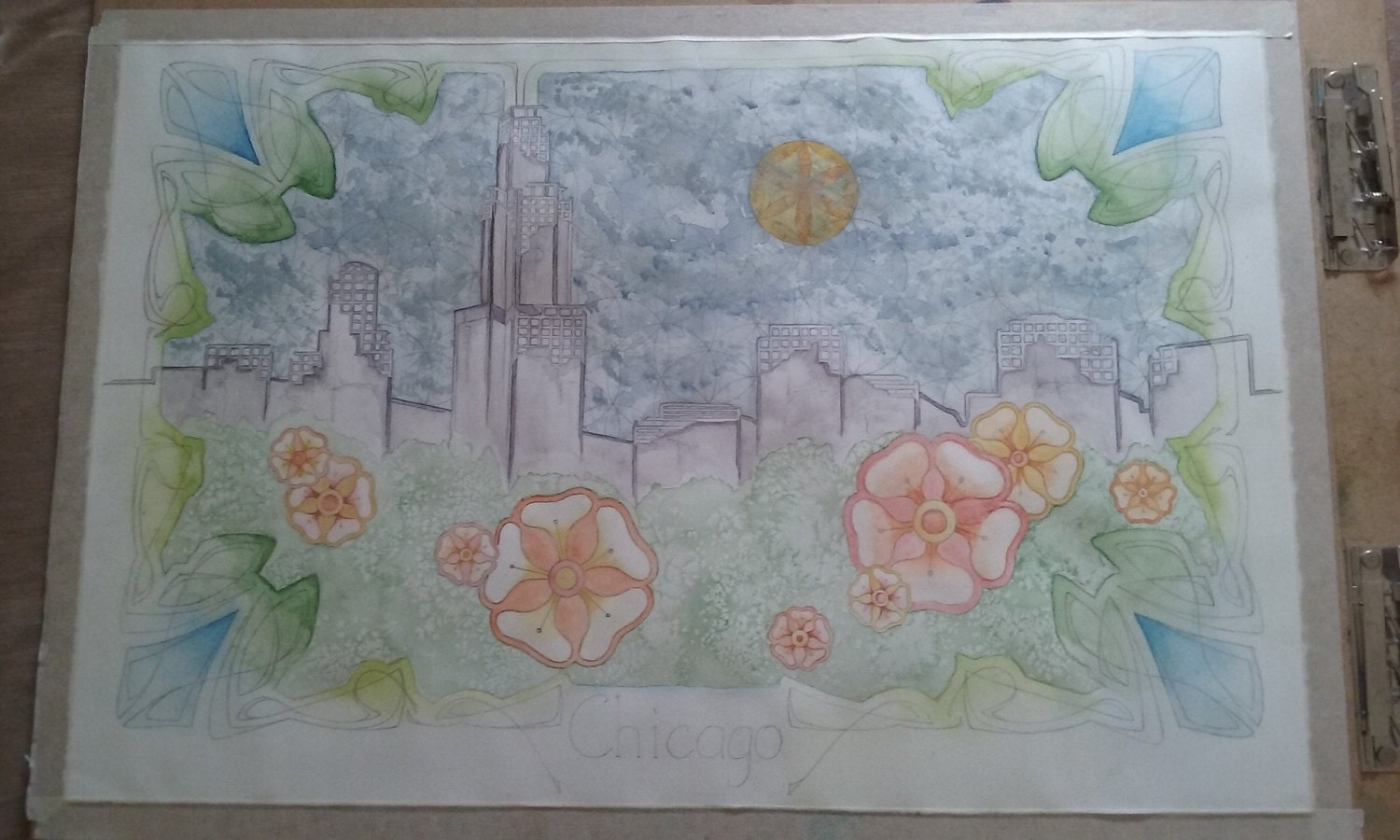 Step 9: The light green foreground was really fun to do!  As I painted I sprinkled salt on the still-wet paint to create a texture with a lot of movement.  I wanted to make it feel like all the vibrantly colored nature in the foreground is taking over the crumbling city. 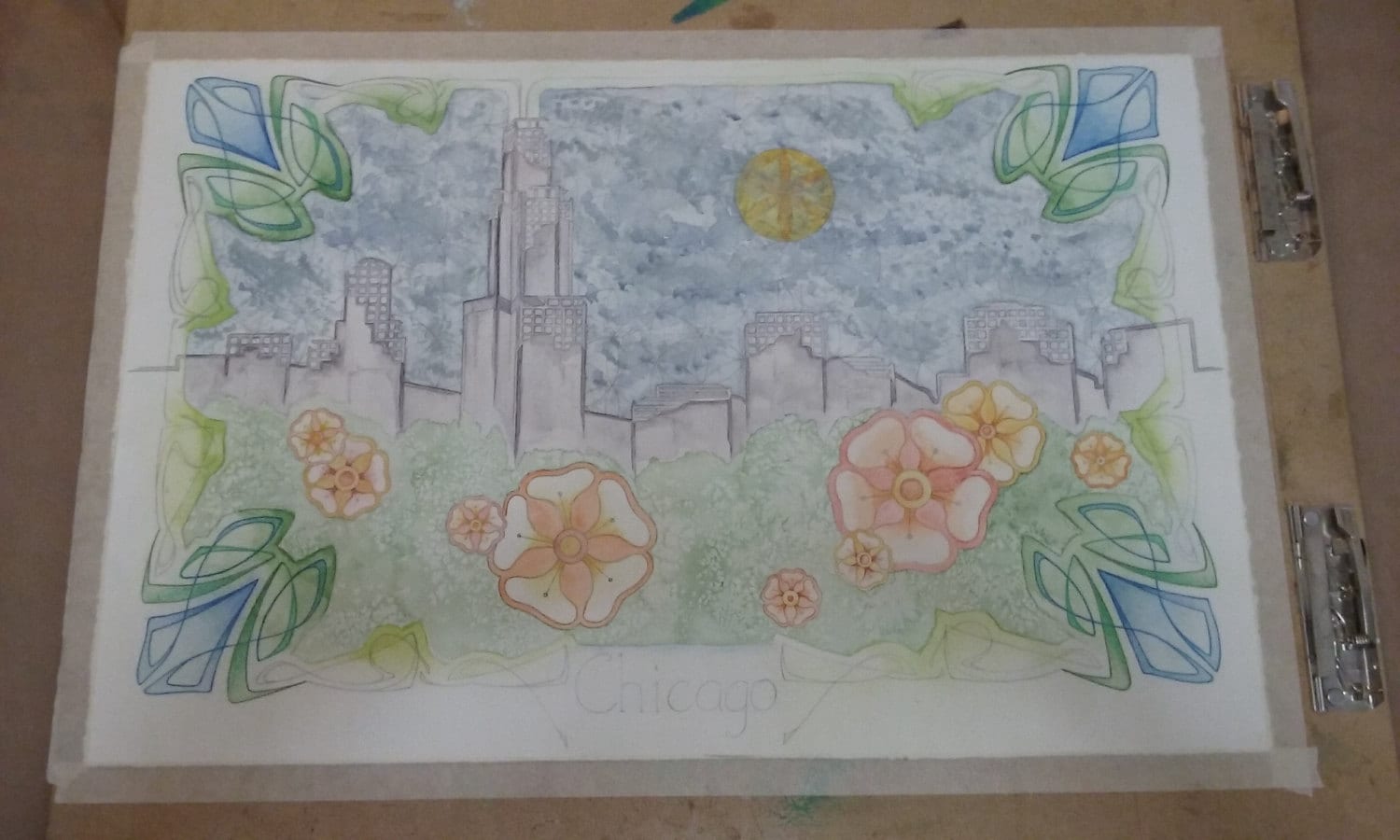 Step 10: Bringing the border details up to the foreground using colored pencils. 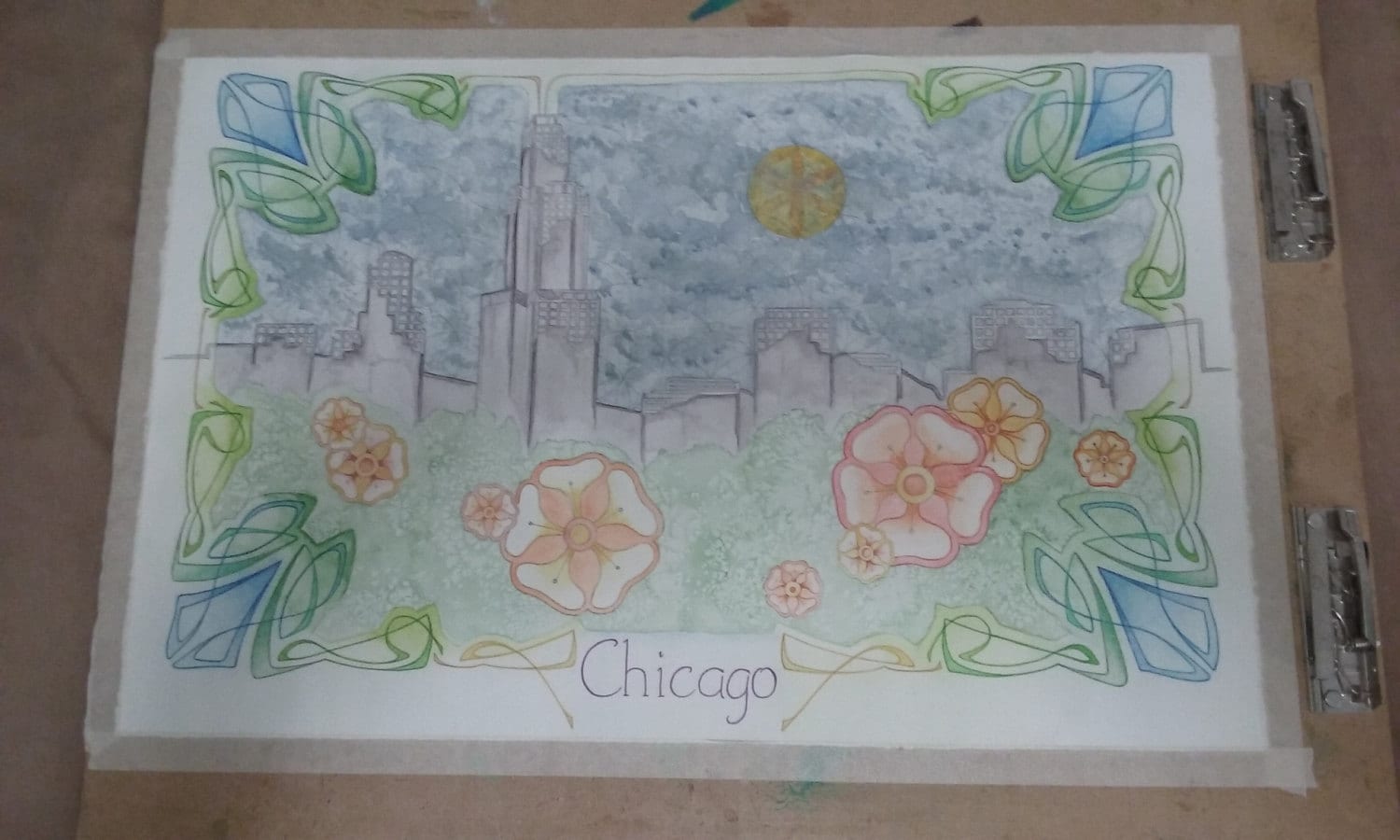 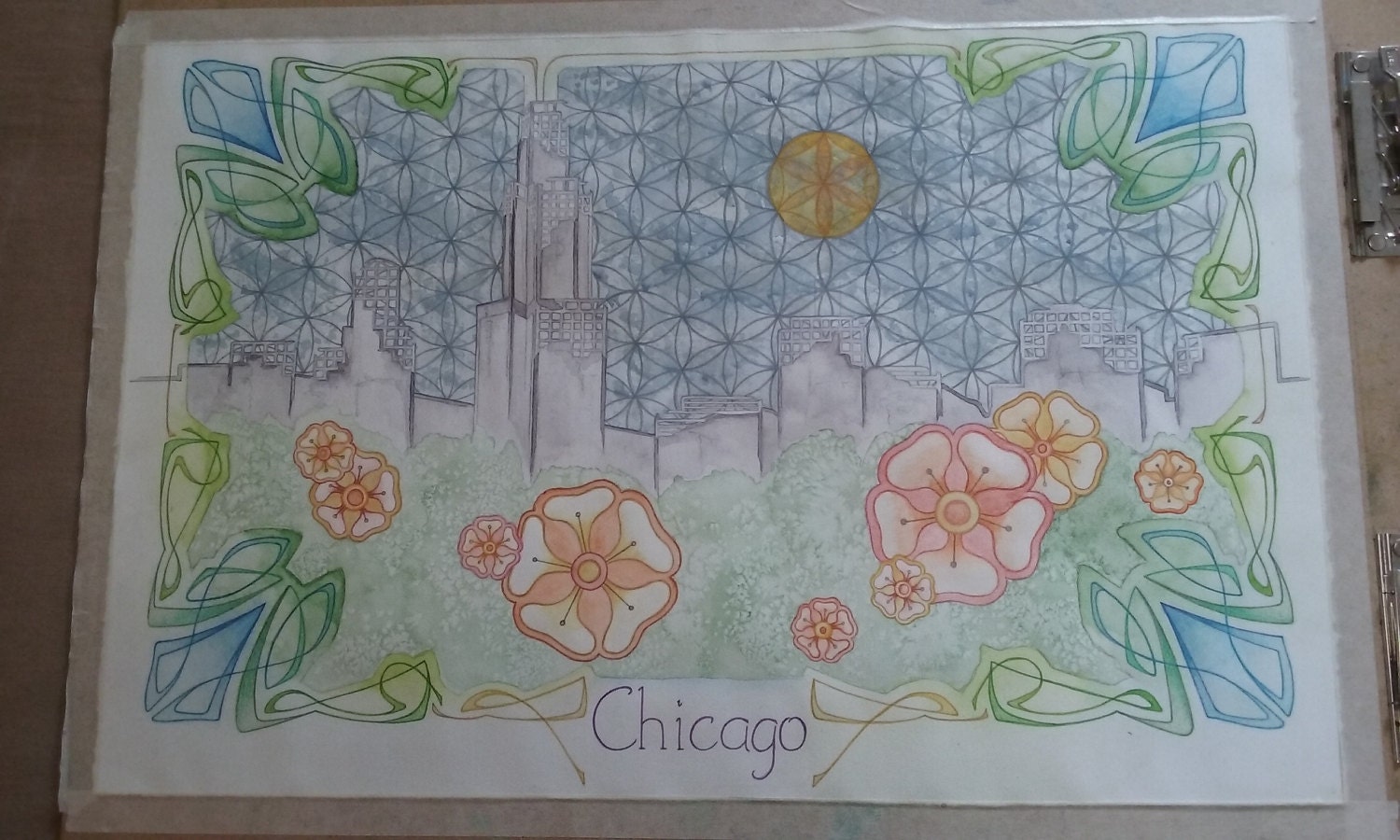 Step 12: I used colored pencil outlines to sharpen and brighten the art deco flowers. Also, the final layer of the stormy sky was added, using grey toned colored pencils to create the flower of life motif accross the sun and sky. 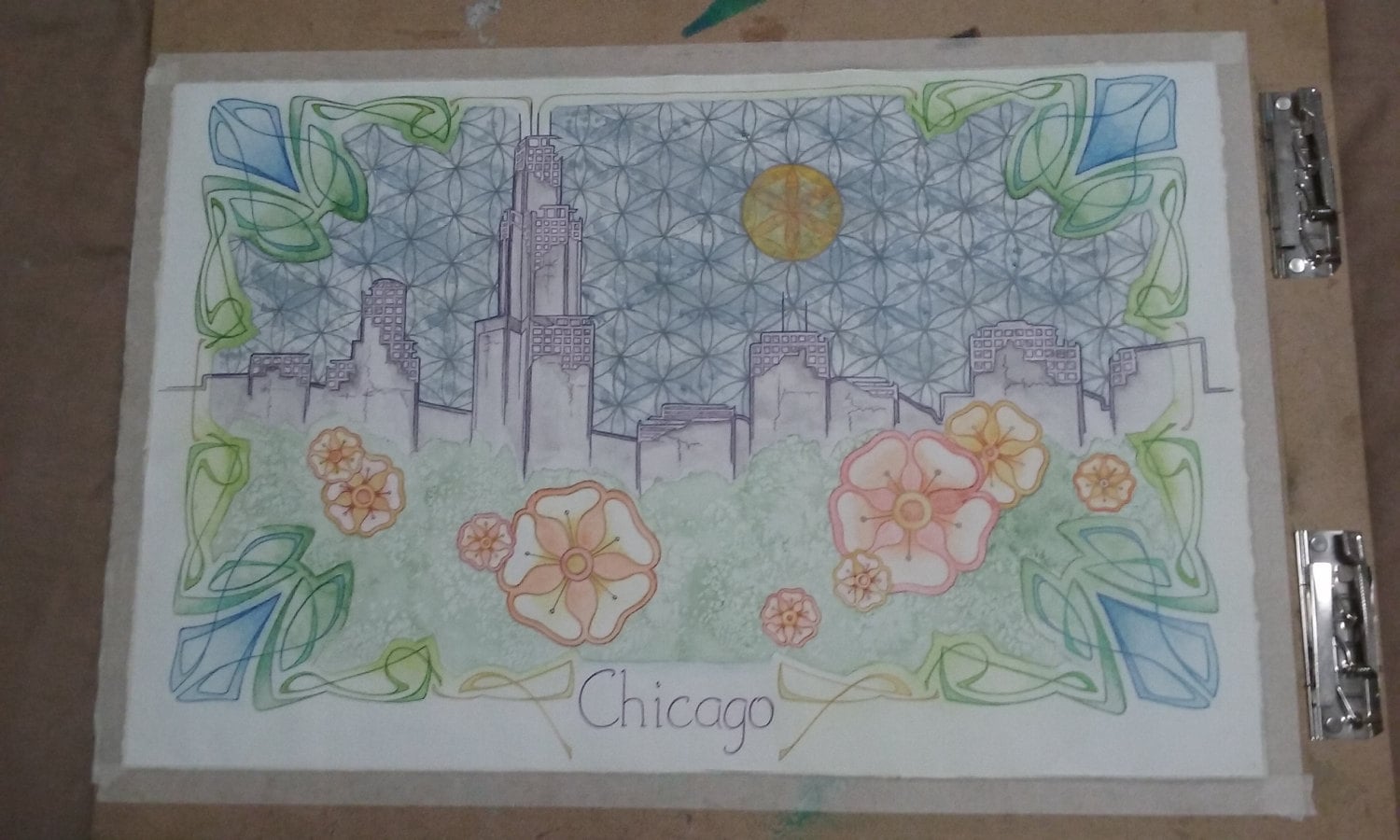 Step 13: The final layer of colored pencils was applied to the skyline, using a thick dark purple on the main outline, and lighter thinner lines to accentuate the details. 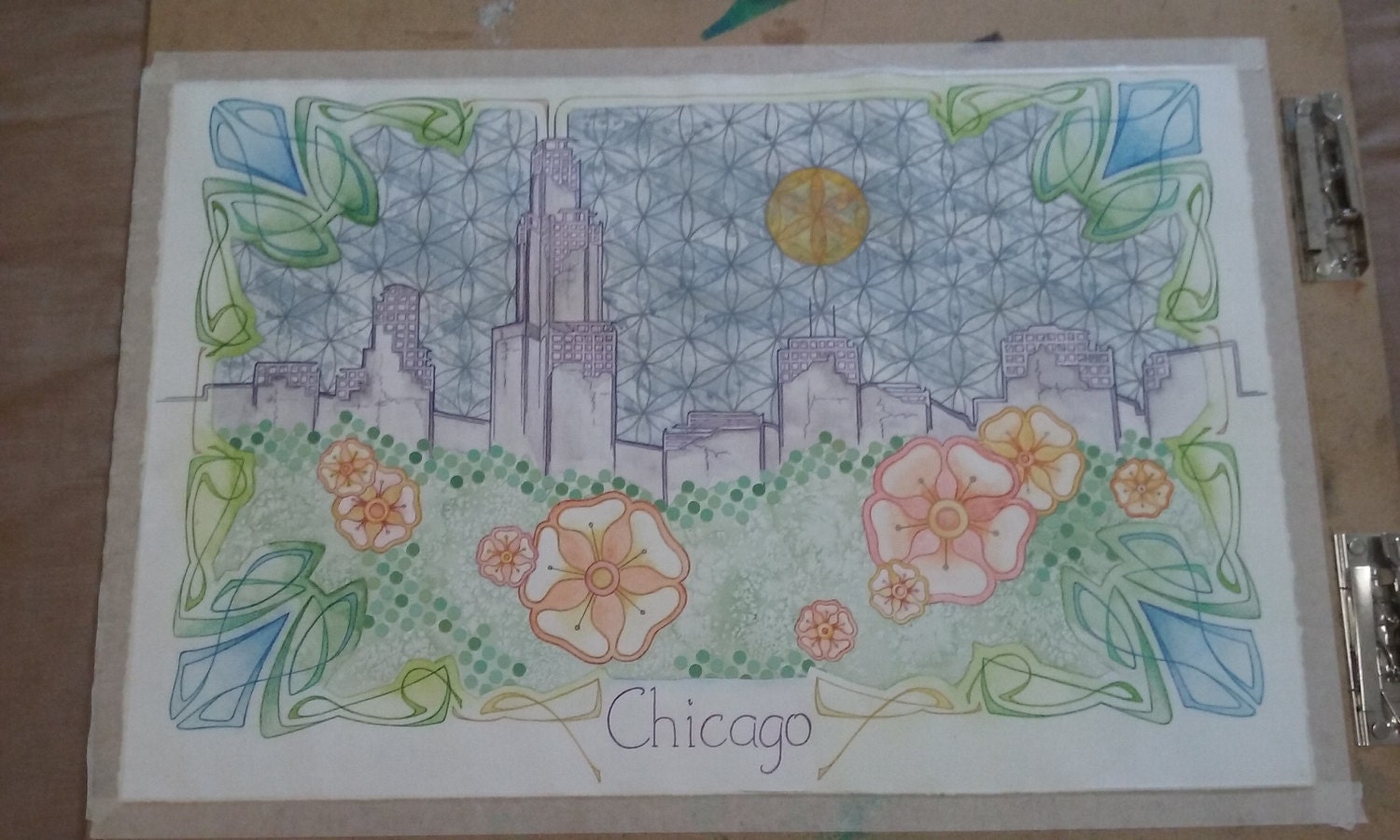 Step 14:  I individually glued small green dots to the foreground in a grid pattern.  I used the field of dots to accentuate the areas of the foreground that turned out especially well throug the wet salt application. 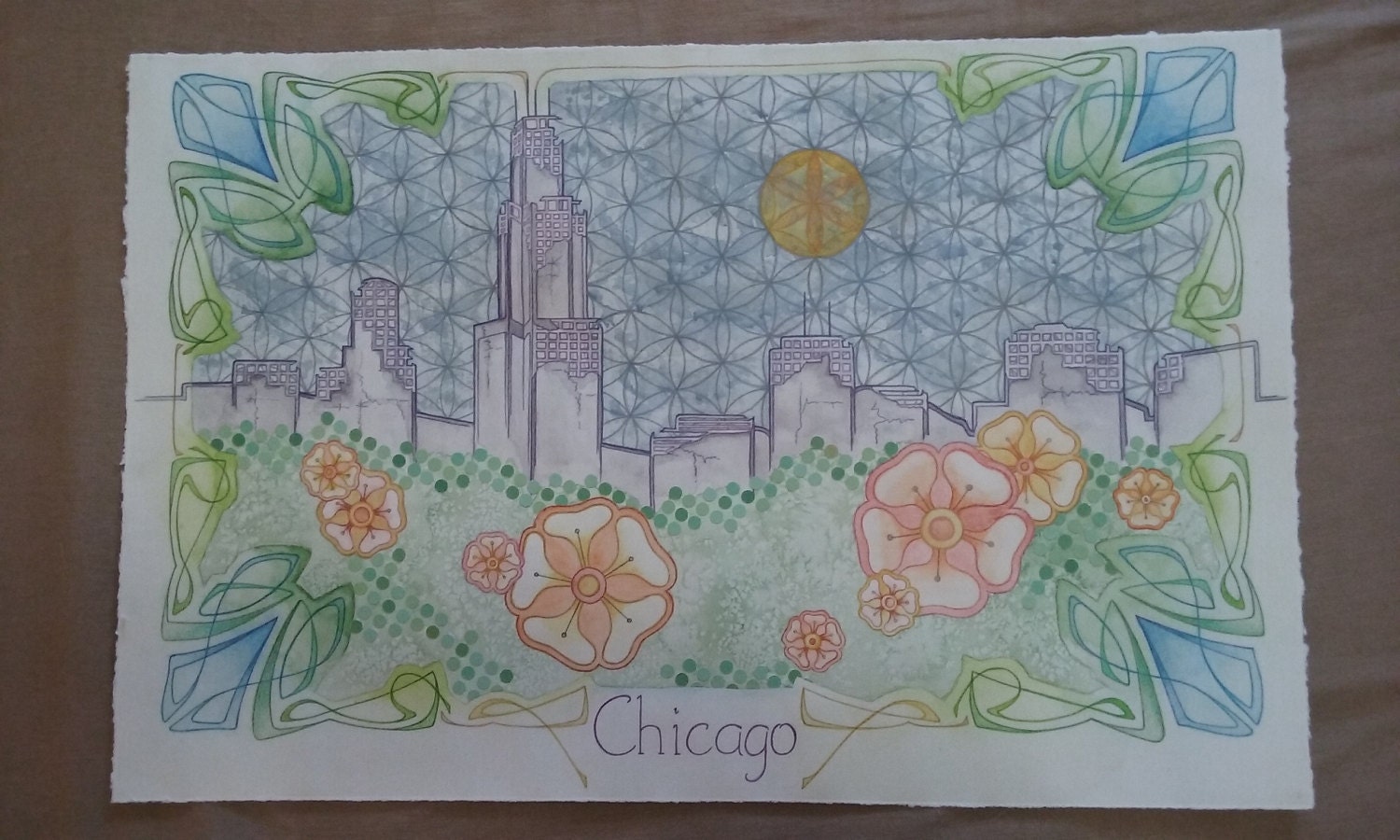 FINAL RESULT!  After layer upon layer and excruciating attention to detail I present "Postcards from the Future: Chicago"

Next Post The Making of "The Oriental Theater, Denver"
0 items in your cart